The Road to Modernism with Baila Miller 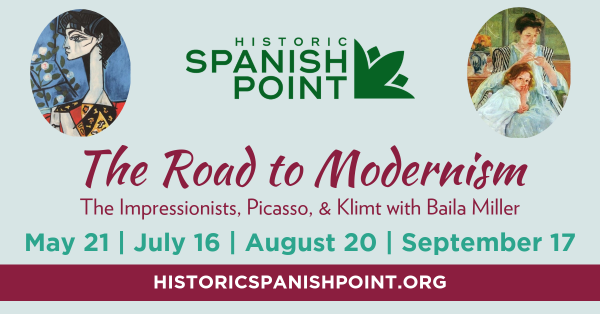 Join Historic Spanish Point for a special presentation series from Baila Miller on the Road to Modernism! From Picasso and Klimt, to the female Impressionists that overcame daunting obstacles, this series will take you on a journey through the artistic expressions that lead to Modernism.

July 16: French Impressionist Women: Mary Cassatt, Berthe Morisot, et al
For many decades, the four Women Impressionists: Berthe Morisot, MaryCassatt, Eva Gonzalès, Marie Bracquemond were treated with either pronounced ambivalence or outright hostility. They had few public exhibitions. However, these women—three French artists and one American artist living in Paris—were as innovative as their male counterparts—Edouard Manet, Edgar Degas, and Claude Monet. While they have diverse biographies, each of these artists overcame daunting obstacles to contribute to the development of Impressionism.

August 20: Picasso’s Women and Their World of Pain
The most important women in Picasso’s life knew from the moment they met him that they would pay dearly for his love. Two killed themselves and two went mad. Picasso had affairs with dozens of women, but six women– Fernande Olivier, Olga Khoklova, Marie-Thérèse Walter, Dora Maar, Françoise Gilot, and Jacqueline Roque –were a crucial catalyst in his development as an artist. Each woman represented a different period in his evolution as a master of 20th Century Art.

September 17: Gustav Klimt: Art Nouveau Visionary
Gustav Klimt was an Austrian symbolist painter and one of the most prominent members of the Vienna Secession movement. Klimt is noted for his paintings, murals, sketches, and other “objects d’art.” Klimt’s primary subject was the female body and his works are marked by a frank eroticism. Among the artists of the Vienna Secession, Klimt was the most influenced by Japanese art and its methods. Klimt’s “Woman in Gold” and “The Kiss” are famous the world over.

TICKETS: Tickets can be purchased online, or by calling 941-966-5214. Please call for Member pricing.